Christian Gottfried Gamper, called Gottfried, was Paul’s third-great grandfather.  He was born in 1797.  The Gamper family hailed from Kaltental, on the southern outskirts of Stuttgart – the capital of the Kingdom of Württemberg for almost a century before his birth.  Gottfried’s Gamper ancestors were:
Gottfried’s ancestors never lived more than forty miles from the intersecting borders of present-day Germany, Switzerland, and France. 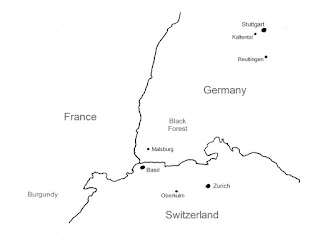 Of particular interest is Gottfried’s great grandfather Georg Adam Gamper.  Adam married Maria Margaretha Hohloch.  Researcher who have followed Margaretha Hohloch’s family trace back to Bertoldus Hubere, Gottfried’s 18th great grandfather, born somewhere in Bourgogne (Burgundy), France, in 1185.  Burgundy is the area that begins about 50 miles southeast of Paris and extends nearly to the Swiss border.  Sometime before 1222, Bertoldus actually moved to Oberkulm, Switzerland, where his descendants were born.  This move may be related to the continuing wars in France at the time.

Generations later, the Huber family moved to the city of Reutlingen, just south of Stuttgart, now Germany.  The family name changed again with that move – from Huber to Uber – around 1500.  (Other branches of the family that relocated to English-speaking countries often use the surname Hoover.)

Another of Gottfried’s 17th great-grandfathers, Albert von Werenwag, was born in 1190 in that same city of Reutlingen where his descendants lived for many generations.  Albert is Gottfried’s oldest known ancestor to be born in what is now Germany.

In 1612 in Reutlingen, the Uber and Werenwag families intermarried.  Gottfried’s 5th great grandfather Georgicus Werenwag wed his 5th great grandmother Agathe Uber.  It was their great-great granddaughter Margaretha Hohloch who married Adam Gamper in the 1720s.

Gottfried Gamper and his wife Catherina Seher, had five children – Johanna Margaretha (b. 1928), Johann Georg (b. 1830), Christina Margaretha (b. 1831), Sophia Catharina (b. 1833), and Johann Gottlieb (b. 1835).  Johann Georg passed over at age 1, Christina at age 6, leaving just Johanna, Sophia, and brother Gottlieb.  The widower Gottfried married a second time in 1836 to Dorothea Klenk and produced another daughter Rosina, who died in infancy.  Gottfried was again a widower before 1852.

Gottfried came from a family of nine boys.  This in itself may have made life difficult for him because of the inheritance tradition of dividing the family property among the sons.  Many farms became so small that they could barely feed a family.   This was compounded by the potato blight that struck in the mid-1840s.  While most famous in Ireland, the potato famine existed throughout Europe.  This time known as the “hungry forties.”

Presumably as a result, Gottfried and all three of his children emigrated to the United States.  The first was Gottfried’s older daughter Johanna.  She is listed in the Württemberg Emigration Index in March 1849.  The particulars of her travel are not known – only her destination of North America.

Gottfried Gamper and his remaining children, Sophia and Gottlieb, emigrated in 1852, arriving in New York from Le Havre, France, on the 12th of April aboard the sailing ship Republic.  They were among a group of 366 farmers with a destination of llinois.  Their travel together may have been the result of sponsorship by one of the German princes, who thought it more cost-effective to export their poor.  Or they may have had a U.S. sponsor who paid for their passage in return for their labor.  No certain U.S. records for Christian Gottfried Gamper or his son Johann Gottlieb Gamper have been found.  However, there was a John Gamper living in Chicago in the 1880s and 1890s.

While difficult to find, there is one online record containing the name of older daughter Johanna Gamper – the 1940 Brooklyn death certificate of one of her daughters, Wilhelmina (Lang) Glier.  This record also provided the name of Johanna’s husband, John Lang, another German émigré.

John Lang and Johanna Gamper were likely married by 1851 when their oldest known child, Frederick was born.  In later records, Johanna reported that she was the mother of nine children, six of whom were living in 1900.  Sadly, John Lang passed over in 1869.  His will confirms the name of his wife – Johanna Margarethe.  And his probate records tell us about their six living descendants – Frederick (b. 1851), Sophia (b. 1855 and perhaps named for Johanna’s sister), Elizabeth (b. 1859), Joseph (b. 1861), Wilhelmina (b. 1864), and George (b. 1866) – are listed as living in Brooklyn at the time of probate.

The same children are listed in the 1870 New York Census but without Frederick Lang, who would have been 19 years old and out on his own.  In that document, Johanna was said to be the owner of a butcher shop.  Johanna (Gamper) Lang had at least thirteen grandchildren.  Sixty-five of her descendants have been identified from online records.

Johanna’s daughter Elisabeth Lang married a man named Albert Ehrlich and moved with him to Egg Harbor, New Jersey.  Albert died at age 31, but not before they had a daughter – Laura Sophia Ehrlich in 1889.  Laura married into the Karrer family, a well-known name in Egg Harbor.

Johanna’s son Fred is also mentioned in her will as “Frederick Lang or Kalmbach.”  She specifically left him nothing because he had borrowed so much money from her during her lifetime.  From what I can make out, Frederick Lang adopted the name Charles Frederick Kalmbach.  Charles F. Kalmbach was an entertainer, usually working as a xylophonist at the Coney Island casinos.  Fred / Charles had four children, and was a widower by 1900.  He then died in 1903, and the children – John, Alida, George, and Katherine Kalmbach – went to live with their widowed aunt Elisabeth Lang Ehrlich (above) in Egg Harbor.  They were living there in 1910.  Alida also remained in the area, marrying into the well-known Nell family.

Gottfried’s younger daughter Sophia was in New York in 1854 where she married my great-great grandfather John George Molz on the 17th of July.  Next she was in Chicago in 1856 for the birth of her oldest daughter Ernstine Molz, and then back to New York by 1858 for the birth of her son John George Molz, Jr., and daughter Carolina in 1860.  A fourth child, Susanna, was born either in New York of Philadelphia in 1863.  Both of the younger girls were baptized in Philadelphia in 1864.

Sophia’s husband John George Molz was killed in the Civil War Battle of Wilderness in May 1864.  In 1865, Sophia remarried a man named Jacob Yoos.  Yoos proved insane, and was committed.  Sophia then took refuge for several years with her widowed sister Johanna in Brooklyn following the insanity of her second husband Jacob Yoos.  She later married again (bigamously) and moved back to Philadelphia with her third husband Joseph Meier – with whom she had two more daughters.  A total of 409 of Sophia’s descendants, including the writer, have been identified.

Sophia’s daughter Ernstine eventually relocated with her husband, Ernst Platz, to a farm on the Harding Highway near Mays Landing, New Jersey.  Upon her passing. That farm was inherited by her brother, John George Molz, Jr.  Many of his children came to live in the same area.

Egg Harbor and Mays Landing, New Jersey, are just a few miles apart.  As a result, Johanna and Sophia’s descendants were often known to one another because of their proximity but not their common ancestry.  The writer himself, Sophia’s descendant, unknowingly went to high school with several of Johanna’s descendants. 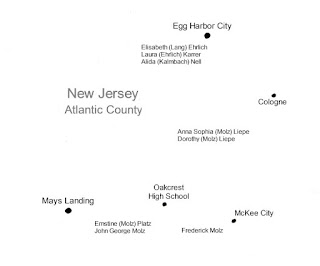