The Independence Day weekend seemed an appropriate time to visit Red Hill Plantation, the Patrick Henry National Memorial.  Located near Brookneal, Virginia, Henry bought Red Hill on his retirement in 1794 and continued here until his death in 1799.

Unlike other historic properties we have visited, Red Hill is not particularly grand and is partly a reconstruction.  While Henry’s law offices and some other outbuildings are original, the plantation house (below) was reproduced in 1954. 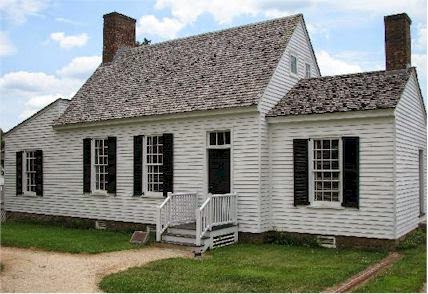 The beauty of Red Hill is its idyllic setting.  Located on the Staunton River, it was once a 520-acre tobacco plantation.  Flatboats called bateaux carried the crop downstream.

The Red Hill Visitor’s Center includes a museum with the largest collection of Henry memorabilia anywhere.  The centerpiece is Peter Rothermel's famous painting Patrick Henry before the Virginia House of Burgesses, depicting his "If this be treason, make the most of it" speech against the Stamp Act in 1765.

For a nice drive in the country and a pleasant setting, Red Hill can’t be beat.

Posted by Paul Liepe at 7:36 AM No comments: