Some who see into the great beyond say that the greatest pleasure its residents receive is to be remembered here on Earth.  If that is so, there were a great many smiling on Sunday, June 7, 2015.  But I get ahead of myself.

Before her family moved to Florida late in the 1950s, Marjory remembers going to the June Meeting.  But because she was a small child, those memories are indistinct – certainly not including the location or the way to get there.  It was not long after we married 46 years ago today that I began to hear about the June Meeting from Marjory’s family.  Uncle Arlie talked about the difficulty of walking to Wind Cave and of finding the cemetery.  Grandma, born Annis Isaacs in Wind Cave, spoke wistfully of her years in the mountains before much of the surrounding land became a national forest in 1937.

With each passing – Marjory’s grandma in 1985, her father in 1990, and Uncle Arlie in 2011 – our desire to attend the June Meeting increased.  At the same time, our ability to learn more about the time and the place became less.  In 2013, in a conversation with Marjory’s Aunt Gerd, she said that her son, Danny Lee Gabbard, attends every year.  She said he was in Richmond, Indiana, and was listed in the phone book.  Not true.  And then Gerd had a small stroke, eliminating her as a source of information for some time.

Finally, in early 2015, I thought to ask Marjory’s Aunt Glory is she had a phone number for Danny Lee.  Turns out she did and dialed him right away.  It took a while to explain who I was, but the connection was made with a promise to talk again in late May or early June.  Our next contact resulted in a promise to talk on Saturday evening, June 6, but that didn’t happen because of the non-existent cell coverage in the area.  So on Sunday morning, we set out for Wind Cave on a prayer.

First we reached the City of McKee, county seat of Jackson County, with a population of about 900.  From there, we headed further up the mountain based solely on a location for the area called Wind Cave on Google Maps.  Uncle Arlie was right about it being difficult to find, but GPS has made life easier.  After about 20 minutes of twist and turns on single-lane asphalt, we were on Wind Cave Road – a one-lane affair that eventually became just crushed stone.  But there was a small sign for the Wind Cave Baptist Church that gave us confidence we were headed the right way.

At the church, we found a grave yard with many of Granma’s kin.  Her parents are there, Godfrey and Matilda “Tildy” Isaacs (below), as are some of her brothers and sisters.  At 11:00, there was a small service (six people counting us) at the church. 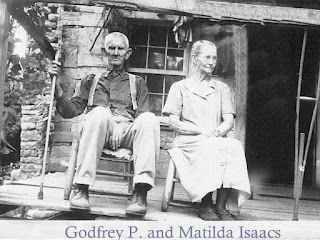 While we had found some of what we wanted to see, there had not found Danny Lee.  Fortunately, he found us.  (Marjory and Danny Lee below.) 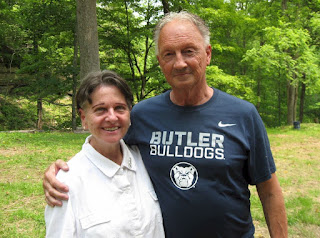 Turns out, the larger meeting is at the Lakes Cemetery about two thirds of a mile further on.  While we had thought this was an Isaacs meeting, it was really a Lakes meeting.  Carter Lakes arrived in the area in the early 1800s and is the father of Wind Cave, both figuratively and genealogically.  Carter Lakes is Marjory’s fourth great-grandfather and, with eleven children, an ancestor of most everyone who lived nearby.

So, along with fifty or sixty others, we attended the June Meeting at the Lakes Cemetery in Wind Cave, Kentucky.  There were Lakes, Gabbards, Maupins, Isaacs, and many more.  Prayers were offered and songs were sung.  And we were all reminded of the importance of family and of honoring our ancestors.

From there, we adjourned to the site of the Gabbard homestead.  While there are no original family houses in the area, there was a new cabin being fitted out and a nice stretch of land to sit and talk.
Our trip to the June Meeting in Wind Cave was certainly a memorable one, and something we intend to repeat.  We’ll be better prepared next time with bug spray, toilet paper, folding chairs, and plenty to eat and drink.  And we invite any of the descendants of Carter lakes to travel with us.

I’ve prepared a map with points of interest for those who might like to make the trip themselves including the location of the sign pointing to the church and another local landmark.  It seems there is nearly always a dog sleeping in the road at the intersection of Lakes Creek Road, Foxtown Road, and Salt Rock Road.  See you there the first Sunday after the first Saturday of every June. 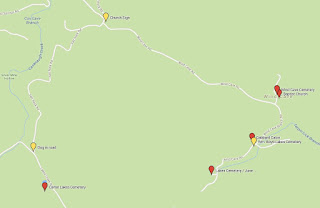