Danville and the Steam Railroad

When most of us think about the steam railroad in Danville, we think of the arrival of the Confederate government in 1865 or the wreck of the Old 97 in 1903.  There is much more to the story.

The first line to reach Danville was the Richmond & Danville Railroad in 1856.  This was before the standardization of railroad gauges, built to a five-foot width. It was the R & D that brought the government and President Jefferson Davis to Danville, but it was not the only railroad to serve the city; four more lines arrived by 1890.

Built in 1862 and 1863, the Piedmont Railroad extended from Danville to Greensboro, North Carolina.  This line was the only railroad chartered by the Confederate government because it was a military necessity. North Carolina agreed a day later to ensure the line would be built at that state's 4'-8½" gauge. This caused through freight to be transferred at Danville, thus making the North Carolina's port of Wilmington more attractive. Eastern North Carolinians wanted their state’s goods to ship through their own port.
Once chartered, the R & D owned 99 percent of the stock, and built and operated the railroad.  Service began in late 1863. Because of war time shortages, this road was also poorly built, further discouraging its use.  However, it proved its value after the Petersburg Railroad to Richmond was cut by Grant’s army in 1864, leaving only the Piedmont Railroad and the Richmond and Danville to bring supplies to Lee’s army defending the Confederate capital.  It is said that the existence of the Piedmont Railroad extended the life of the Confederacy by many months.

On the close of the war, the Federal government seized and operated the Piedmont on the theory that it was the property of the Confederacy.  It was not returned to control of the R & D until December 1865.  At about the same time, the North Carolina legislature authorized conversion of the line to the R&D five-foot gauge.  The first through train from Richmond to Greensboro rolled on February 14, 1866.  The profit from this property to the R & D was minimal until the R & D converted its lines to what had become the nation standard of 4'-8½" by 1886.

The third line was the Virginia Midland Railway.  Technically, this road had its terminus in North Danville, a separate city at the time.  Began in 1880 and extending south from Washington, D.C., service to Danville through Alexandria, Charlottesville, and Lynchburg began in 1882 or earlier.  The Virginia Midland also offered connections through other lines to many of Virginia's mountain resorts.

The fourth line to serve Danville was the narrow-gauge Danville and New River Railroad (D & N R R).  While chartered in 1873, construction actually began in 1880.  By late 1882, the 43-mile run to Martinsville was carrying passengers.  The D & N R R never had the resources to extend much farther and was sold to the Richmond & Danville in 1891.  It was then reorganized as the Danville & Western Railway.  Known locally as the “Dick & Willie,” a third rail was added for standard gauge traffic reaching Martinsville in 1902.  Its superintendent was George King Griggs who owned the home at 848 Green St.

The Dick & Willie still exists today as a branch line of the Norfolk Southern Railway extending from the Stokesland area of Danville to the Leaksville Junction.  (Leaksville is known today as Eden, North Carolina.)  A part of the rail bed abandoned in 2009 is now the Dick & Willie Passage Rail Trail through Martinsville.

The fifth line, the Atlantic & Danville Railway, extending 270 miles from Norfolk and Portsmouth, Virginia, arrived in 1890.  Its purpose was to move Danville products, primarily tobacco, for shipping at the Hampton Roads.  The A & D ran south of the Dan River passing through Denniston (near Alton) and crossing the Roanoke River (with the contributing Dan River) at Clarksville, Virginia.  The railroad bridge there is still in use today and can easily be seen from U.S. 58.

With later mergers, the western section of the A & D became redundant and was abandoned.  Parts of the roadbed are now used as the Tobacco Heritage Trail.

Back to the original Richmond & Danville, control of the Piedmont Railroad and acquisition of the Danville & New River Railroad were only the first of its many acquisitions.  By 1890, the R & D had grown to over 3,300 miles of track extending north through Charlottesville to Washington with connections to New York City, and south to Columbia, South Carolina, and Augusta and Atlanta, Georgia, with connections to New Orleans and Jacksonville.  The extent of the R &D with its connections is shown on the map below. 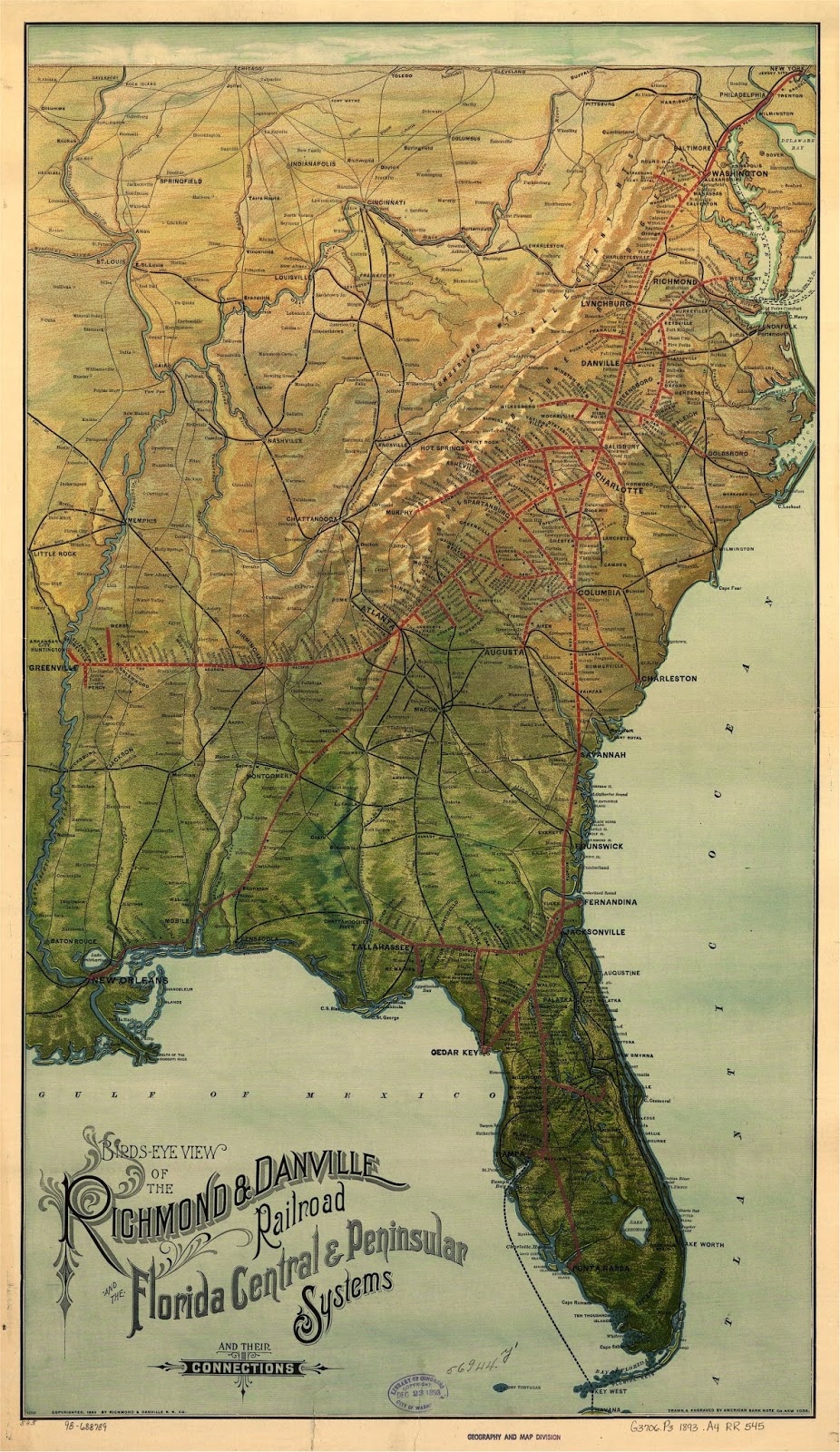 As early as the winter season of 1874-75, private railcars were making their way to Florida through Danville, even though a gauge adjustment was required at Greensboro.  By the winter of 1881-82, many railroads were advertising their Florida passenger routes, claiming superior accommodations to the prevailing steamships.  Jacksonville could be reached from New York in only 36 hours.  An 1885 northbound schedule including both the coastal and Danville routes is shown below.

With the advent of the luxury hotels and Florida East Coast Railroad built by Henry Flagler, the rich and famous often traveled to Florida through Danville.  In 1890, President and Mrs. William Henry Harrison along with Vice President Levi P. Morton visited Winter Park onboard Mr. Flagler’s private car.

Just think, if the Interstate Highway System had followed the most popular rail route to Florida, I-95 would pass through Danville.

The great expansion of the 1880s placed the Richmond and Danville Railroad on shaky financial footing.  In 1894, it emerged from reorganization as the Southern Railway Company along with the Virginia Midland.  It was “The Southern” that constructed Danville’s ornate passenger depot in 1899, listed on the National Register of Historic Places.  Meant more to be seen than used by through passengers, the one-story cream-colored brick building was somewhat plain inside.

It was also “The Southern” that operated the Old 97, the Fast Mail that derailed at Danville’s Stillhouse Trestle on September 27, 1903.  Nine people were killed including the locomotive crew and a number of clerks in the mail car.  The wreck served as the inspiration for a ballad first recorded in 1924.  Since then, “Wreck of the Old 97” has been covered by numerous Country artists including The Statler Brothers with Johnny Cash.  The wreck also inspired a mural in downtown Danville, shown below. 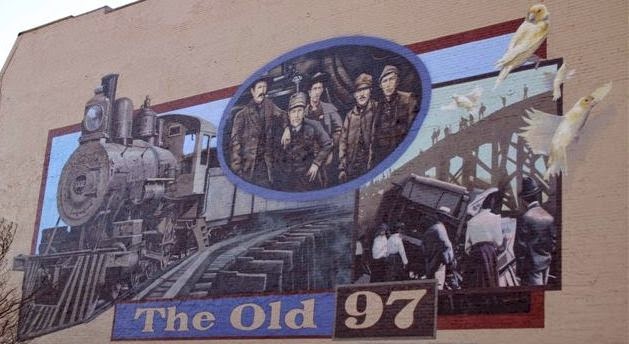 Danville was important to the steam railroads, and the railroads were important to Danville for the many jobs they provided.  Green Street was home to many of the railroaders, including Montilla “Monk” Clark who served as an engineer for the Southern Railroad, often piloting the Old 97 both before and after the great wreck.  Monk’s neighbor Samuel Rickman was an oiler and his friends and neighbors Walter Millicer and Albert Griggs worked there as clerks.  Spotswood Pace was baggage master at the Danville station, a position later assumed by his son Spots Pace, Jr.

In 1939, the Southern Railway began using diesel locomotives, with the last fire “knocked out” in 1953.  Change came again in 1982 when “The Southern” merged with the Norfolk and Western Railroad creating today’s Norfolk Southern Railway.  In addition to freight, the Norfolk Southern tracks through Danville are also used by Amtrak’s Crescent, the sleeper train between New York and New Orleans.  Its progenitor, the Southern Crescent was mentioned in R.E.M.’s song “Driver 8.”  (R.E.M. was one of the world’s best-selling rock bands from 1980 to 1996.)

Today, using the Crescent, you can spend the work week in Washington, DC, and the weekends in Danville, returning to your Capitol office by 10:00 a.m. Monday.  All aboard!

Marjory and I toured the Stetson Mansion in Deland, Florida, on March 3, 2015.  This may have been our most delightful tour ever.  We particularly enjoyed comparing the features of this home with its near contemporary, our W. F. Patton house in Danville, Virginia.

A winter home for famous hat maker John B. Stetson, this 1886 home is a private residence rather than a public house museum.  The owners live there every day, maintaining the property and conducting tours with the assistance of only two docents.  Our docent, Debbie Pixley, obviously loved what she was doing, blending Stetson history with the amazing story of the home's renovation.

While it is not the largest or the most ideally situated, the Stetson is the oldest gilded-age mansion in Florida.  While only 2.3 acres now, it was at one time situated on 300 acres of orange groves, pineapple fields, and sugar cane.

Perhaps the most outstanding feature of the home is its floors.  While many Victorian houses have floors with ornate borders, this house has nothing but borders.  Note the fine tessellation on the floor of the music room below.

Without a doubt, a visit to the Stetson is well worth the time and expense.  Reservations are required, which can only be made at their web site online.

Posted by Paul Liepe at 2:20 PM No comments:

After our visit to the Stetson Mansion in Deland, Florida, we adjourned for lunch at the Brickhouse Grill in the downtown shopping area.  Don't bother.  But on our drive away from the Brickhouse, we stumbled upon the Athens Theatre.  I couldn't resist taking a photo of this 1922 beauty which began its life showing silent films and hosting vaudeville acts.  It was restored in 1994. 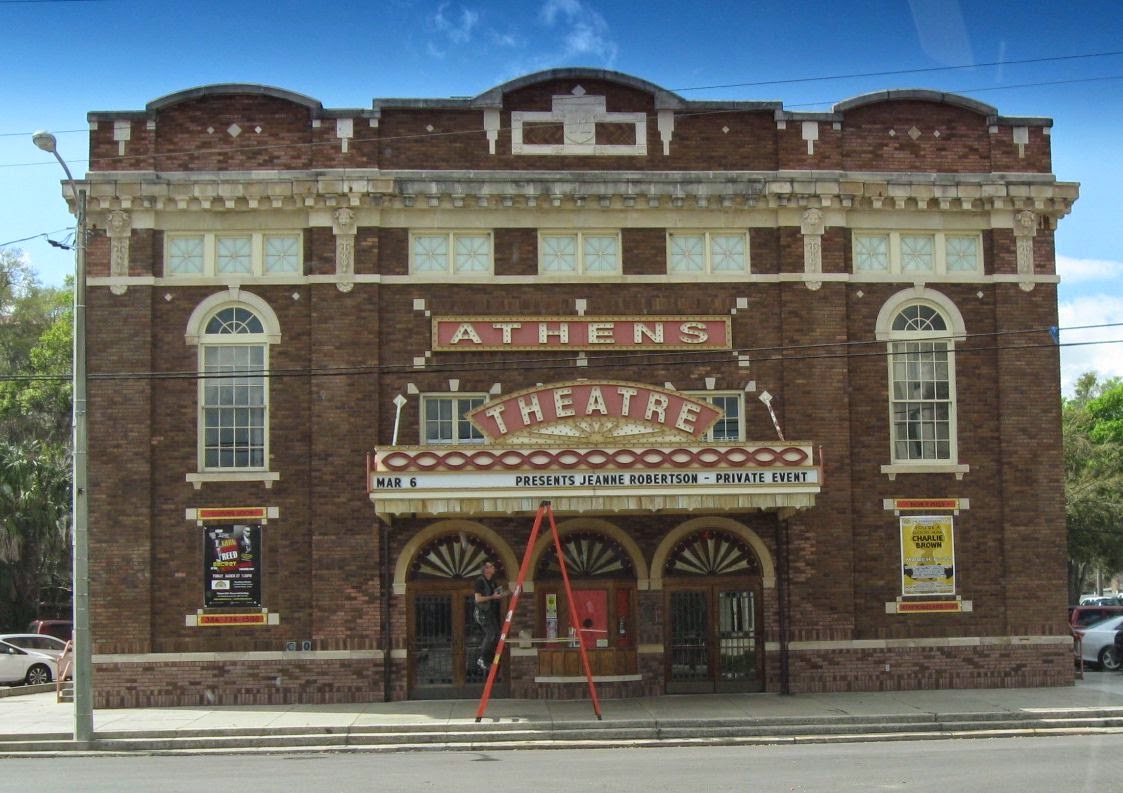 But on to our next destination, the Deland House Museum.  Note that this is not the home of Mr. Deland, but rather a house museum in the city that bears his name.  While this house is of the same vintage as the Stetson Mansion, 1886, the two houses are of different worlds. 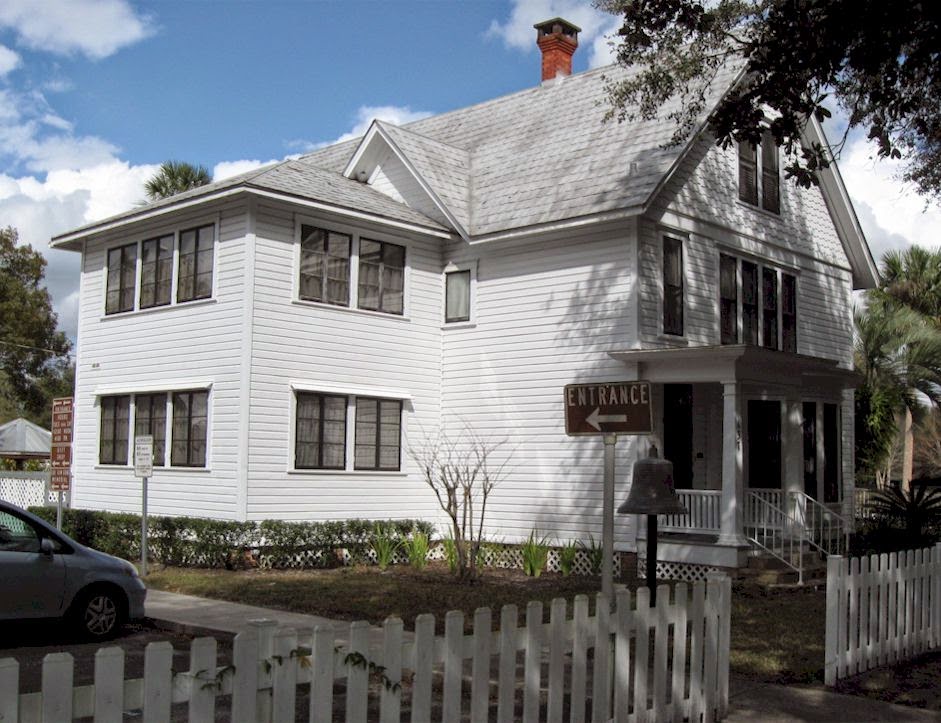 Operated by the West Volusia Historical Society and staffed by volunteer docents, this house illustrated the life of the middle class in turn-of-the-century Florida with period-appropriate furnishings and artifacts.  Perhaps its best feature are the numerous photographs of the city as it developed.

The historical society has a very nice library in an adjoining building called the Conrad Education and Resource Center.  It also operates the old Deland hospital, which we hope to visit in the future.

Posted by Paul Liepe at 2:19 PM No comments:

Interview With My Father - Part 4


(Tell me, did you have a harness maker in town?)
We had a wagon maker. He also worked on harnesses.  Otto.

Interview With My Father - Part 3


(I mean the small bushes, do they spray them or what?)
Yes, you would have to have a duster or sprayer you know.

Interview With My Father - Part 2

(That is probably when they were talking about really before the Second World War.  That’s when I think it was really cheap. I saw it advertised in New York in Strouds agency had the catalogue and my gosh you could buy a hundred acre farm down here for $5000 you know it was unbelievable?)
It’s going to go back to that because the Pineland Commissions are just making our land valueless.

Interview With My Father - Part 1