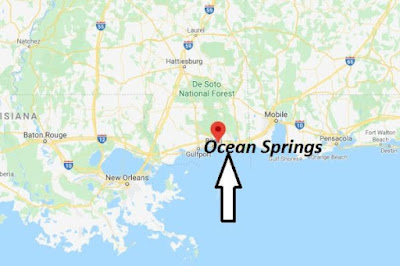 Commissioned by French King Louis XIV, Pierre LeMoyne, Sieur D’Iberville, explored the upper Gulf of Mexico in 1699. He first located what we now call Ship Island about twelve miles from the mainland. He then sailed into a bay where he spotted a high, defensible bluff. There he founded Fort Maurepas, the first capital of the French Louisiana Colony.  The surrounding area and the bay into which he sailed was called Biloxy after the local Native American tribe.

In 1720, the area we now know as the City of Biloxi was settled for the first time. The original settlement across the bay was known as Vieux Biloxy or Old Biloxi. In 1811, the area became part of the Mississippi Territory, with Mississippi becoming a state in 1817.

In 1854, Old Biloxi, the site of Fort Maurepas, became known as Ocean Springs because a New Orleans physician believed the local springs had medicinal qualities. Many tourists visited the local spas.

In the early stages of the Civil War, Ship Island was captured by Union forces, enabling them to take control of the area. No major battles were fought in the area saving Ocean Springs from direct damage from the war.

In 1870, the Mobile to New Orleans railroad came to town returning Ocean Springs to a tourist destination. It also allowed the easy shipment of Ocean Springs’ seafood to regional markets. 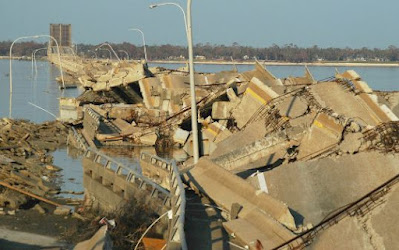 Life changed again in 2005 because of Hurricane Katrina’s 28-foor storm surge. The US 90 bridge from Ocean Springs to Biloxi was destroyed as were many bay-front estates, homes, and businesses. 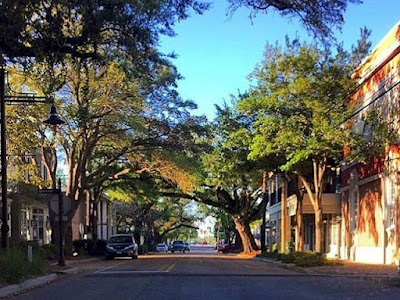 The town has a reputation as an arts community. Its historic downtown streets are lined by live oak trees. It is home to several art galleries and over 150 shops, boutiques, and restaurants. There is nightlife in abundance. 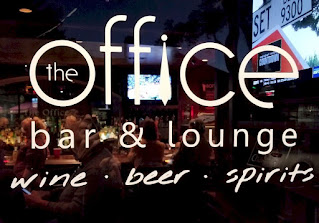 My favorite spots are The Office Bar & Lounge ($3 happy hour) and Maison De Lu for its Escargot Stuffed Mushrooms. They’re amazingly good. I also get to visit my daughter and grandson who have chosen Ocean Springs as their hometown. 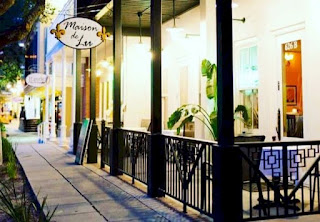 Just before our visit in June 2022, Ocean Springs was named the best small coastal town in the United States by USA Today. Well-deserved in my opinion.
Ocean Springs is also an excellent stepping-off point for other Gulf Coast communities and attractions.  Both New Orleans and Pensacola are less than two hours away.  The luxurious Biloxi casinos (I like the Beau Rivage) are just minutes from Ocean Springs. 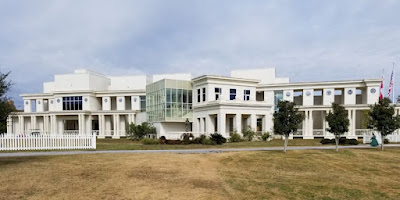 For the Confederate history buff (like me), the retirement home and library of President Jefferson Davis are also located in Biloxi. It was here at Beauvoir that Davis wrote The Rise and Fall if the Confederate Government. Beauvoir barely survived Hurricane Katrina in 2005 and much of its collection of artifacts was lost. The adjoining library was replaced with a new building that has a bit of an empty feel. Excellent guided tours of the mansion are available every day. 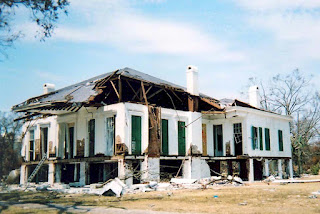 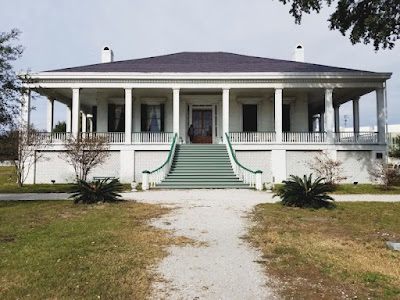 Posted by Paul Liepe at 2:50 PM No comments: 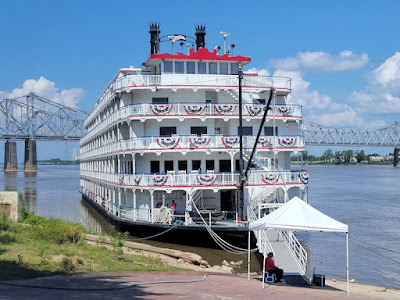 Natchez proper sits on bluff far above the Mississippi River.  However, Natchez was founded in 1716 in an area called “Natchez-under-the-Hill” at river level.  This area was once the rowdiest port on the river – now sometimes called “Natchez improper.”  Like the steamboats of the past, riverboat cruises now dock under the hill.
At the time of the American revolution, Natchez was recognized as Britain's fourteenth colony.  Much of Natchez was pro-Tory and paid little attention to the conflict occurring on the eastern seaboard.  And it was so remote and inaccessible that England never sent troops to the area.

The lowlands along the river in both Mississippi and Louisiana were prime country for growing large crops of cotton and sugarcane using slave labor.  Natchez was the main point of export.  Before the Civil War, wealthy planters built town homes there in addition to or instead of plantation homes.  In the decades preceding the Civil War, Natchez had the most millionaires per capita of any city in the United States.  Many of their homes – often mansions – remain today because Natchez surrendered to Union forces without a fight.  The homes are now part of Natchez identity and make it a tourist destination.

Natchez was the second largest slave trading center in the United States.  Slaves were placed on display at a place called “Forks of the Road.”  Shackles that bound them remind visitors of this terrible time.  Forks of the Road is recognized by The United Nations Educational, Scientific, and Cultural Organization (UNESCO) as a world heritage site. 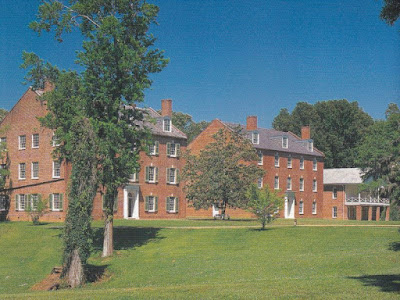 Other Confederate connections include the military boarding school attended by Jefferson Davis as a boy.  Davis attended Jefferson College, named in honor of President Thomas Jefferson, in 1818 at the age of ten before transferring to a school in Kentucky. 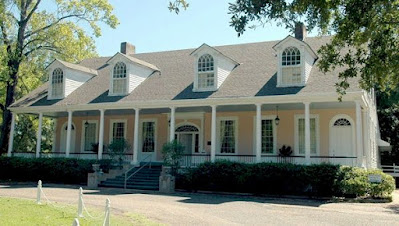 Davis also took a Natchez native, Varina Howell, as his second wife.  They were married at the Howell’s residence, The Briars, in 1845.  (The Briars was inaccessible and for sale at the time of our visit.)  It is said that Jefferson Davis once owned the Governor Holmes House on Wall Street, now a bed and breakfast. 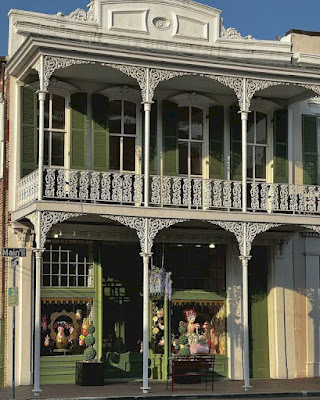 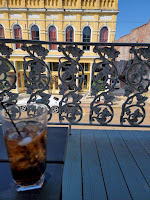 For our short-term stay, Sarah (my heritage travel partner) and I were fortunate to book the Dixon Lofts. Newly refurbished, the 3,000 square foot Dixon features 13-foot ceilings, a fully equipped galley, and a balcony with wrought iron overlooking Main Street.  Three large on-suite bedrooms and a laundry provided every comfort.  We greatly enjoyed the immense sitting / dining / living area.  The balcony was well used for both morning coffee and evening libations.  These 160-year-old quarters just couldn’t have been better.  We visited over Father’s Day and the Juneteenth holiday. 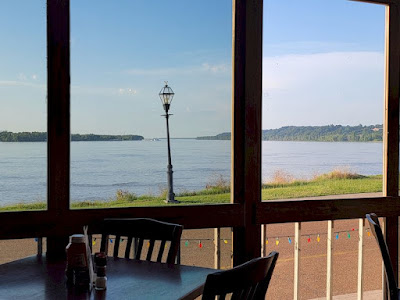 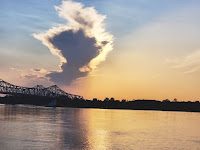 There are plenty of dining choices in Natchez.  The best for us was the Magnolia Grill located under the hill.  The Magnolia has an enclosed patio with great views of the river.  This is complemented by their excellent menu.  For appetizers we enjoyed the fried green tomatoes and the crabmeat stuffed mushrooms.  I had the Silver Street Pasta that I thought was the best past dish ever.  Sarah enjoyed the fried shrimp. 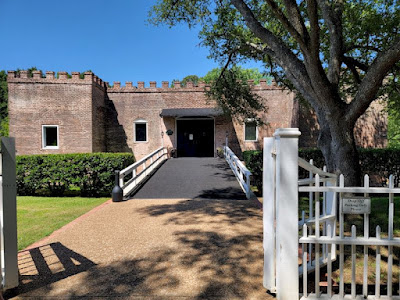 Another great dining choice is The Castle.  This building was originally the carriage house for the antebellum Dunleith house – now a historic inn.  Sunday brunch options on Father’s Day included a smothered pork chop that got rave reviews. 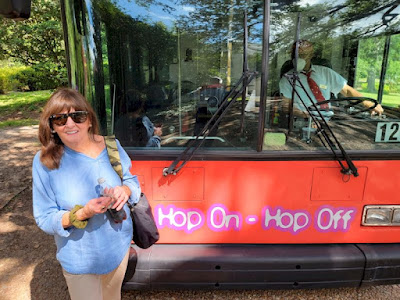 We also recommend a stop at the Visitor’s Center and the Hop On – Hop Off bus available there.  The bus tour is a great introduction to the city’s attractions and an excellent means of transportation between historic sites.

The best and worst times to visit Natchez are for the spring and fall “pilgrimages.”  These times are the best because more antebellum homes are open for tours and there are many special events.  These times are the worst because the city is crowded with other pilgrims.  However, for history and old house lovers, a visit to Natchez is worthwhile most any time.

Posted by Paul Liepe at 4:13 PM No comments: