The Importance of Germantown

The first German immigrants in America came seeking land and the promise of religious freedom. They had heard that both could be found in the newly chartered colony of Pennsylvania, which was governed by a Quaker, William Penn.

Francis Daniel Pastorius, an agent for a land purchasing company in the city of Frankfurt am Main, organized the original party of settlers.  It was a group largely made up of German Quakers and Mennonites from the Rhineland.

Pastorius preceded the settlers to America, arriving in Philadelphia in mid-August, 1683. He negotiated with Penn for a tract of land a two-hour walk northwest of Philadelphia on which to build a settlement, which was to become known as "Germantown."  Six weeks later, on October 6, 1683, the ship Concord sailed into Philadelphia's harbor from Germany.  On board were individuals from thirteen interrelated families:

The German settlers felt an immediate kinship to their new home, as Pennsylvania's rolling hills and fertile plains resembled the terrain of the land they had left behind.  Their accounts of life in the New World soon prompted other German immigrants to follow their lead. Settlers representing a variety of Protestant religious groups began descending on Germantown.  Descendants of these first German immigrants are called Pennsylvania Dutch - an Anglicization of the word "deutsche" meaning "German."

Wilhelm Streypers and his wife are both the grandparents-in-law of Marjory’s 8th-great aunt as well as Paul’s 7th-great grandparents.  Marjory is also linked to the Teison / Tyson family (see Welsh Quakers and Pennsylvania Ironmasters) while Paul is also the 7th-great grandson of Thones Kunders and his wife (see First German Ancestors).  Perhaps soul groups on the other side do travel together.

The tri-centennial of the arrival of these first German settlers was celebrated in both the United States and Germany by the of commemorative stamps shown below.

Some 94 years later, Germantown became the site of British occupation and is remembered for its Revolutionary War battle.  On October 2, 1777, George Washington conceived a bold plan to attack a 9,000 troop garrison of British General Howe stationed in Germantown.  It called for the simultaneous advance of four different units of troops, moving by night.  At dawn on October 4, the four columns were to converge not far from General Howe's headquarters and catch the British by surprise.

The morning started well for the Revolutionaries who had the British retreating. But Washington's plan went astray when one of his four columns lost its bearings in a dense fog and thick smoke.  The British defense was particularly strong at a 1763 Germantown mansion called Cliveden. 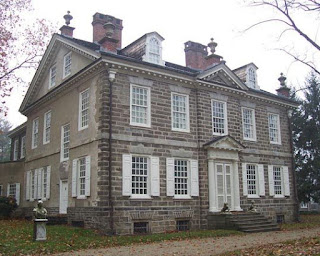 In the end, bad luck and poor timing forced Washington to retreat.  In the end, the Revolutionaries suffered 152 losses including William Harvey, Paul’s 4th-great grandfather and husband of Mary Streepers, the great-granddaughter of Germantown settlers Wilhelm Streypers and his wife.  While the Battle of Germantown was considered an American defeat, it did serve to boost morale and self-confidence among Washington’s troops.