I almost named this post “Pots by Potts,” but that would be a far too frivolous title for a family with such deep religious convictions and so important in the history of Pennsylvania and the iron-making business.

Thomas Potts (1632-1680) was Marjory’s 9th-great grandfather.  He lived in Llanidles in the Shire of Montgomery, Wales.  He was one of the earliest followers of a man named George Fox who founded the Religious Society of Friends about 1847.  Members of this society was often called Quakers, as they were said to tremble in the way of the Lord.

This same Thomas Potts was also the 6th-great grandfather of President Richard Milhous Nixon, making Marjory this President’s 7th cousin three times removed.  (She is a cousin to many other presidents including Washington and Jefferson.)

The Quaker movement faced strong opposition and persecution in those days.  Many of the followers were jailed and had their property taken from them.  They were a threat to the official church, and refused to pay the tithes normally required.

Thomas’ son John Potts (1658-1698), Marjory’s 8th-great grandfather, was also a Quaker.  As a result, John had considerable difficulty in Wales.  On 18 July 1677, he was arrested and sent to prison for attending a meeting of Friends at the Montgomeryshire house of John Jarman.  John was at the head of the list of those arrested, and suffered the largest fine of “one cow and six young beasts” with a value of 12 pounds 10 shillings.

Thomas Potts (1680-1752) was Marjory’s 7th-great grandfather and an immigrant from Wales.  Some researchers say he traveled here with his father John and his sister Mary (later Tyson), while others insist that Thomas and his siblings were orphans sent to their uncles and aunts in the Pennsylvania colony after their father Thomas (above) passed in 1698.  (All of the Potts were Quakers, drawn to Pennsylvania by the guarantee of religious freedom offered by its founder, Quaker William Penn.)  Those uncles and aunts were Thomas Potts (a miller in Bristol, PA), Jonas Potts, Elizabeth Potts, Margaret (Potts) Shoemaker, Jane (Potts) Austin, and David Potts.

This same Thomas Potts became involved in the iron business at Colebrookdale in Berks County, just east of Reading and northwest of Philadelphia.  The owners of the furnace there leased it to Thomas Potts.  Colebrookdale is likely named for an English furnace of the same name, not terrible far from the Potts ancestral home in Wales.  The family may have been family with this operation in the old country. 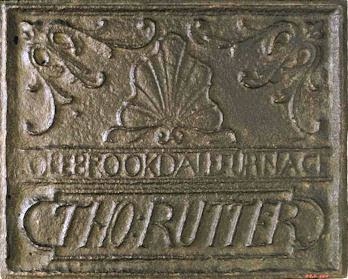 Colebrookdale was well known for its cast iron stove parts as well as pots, kettles, and pot hooks.  Thomas Potts often worked with his family and other Quakers to market the furnace’s products.  For example, his brother-in-law Thomas Yorke became an agent, selling 19 pots and kettles in 1738.  Potts’ first cousin Jonathan Potts was also responsible for sales of up to £20 each year.

Thomas Pott’s sons John and David did all of the casting in 1740.  John Potts (1710-1768), Marjory’s 7th great uncle, remained in the iron business, creating the largest iron-making empire in colonial America.  First, during the 1740s and 1750s he acquired or increased his interests in Pine Forge, Mount Joy Forge (also called Valley Forge), and Coventry Forge, all located in the Schuylkill River valley. He erected a mansion (below) at Mount Joy Forge, later in possession of his son Isaac, which George Washington later used as his headquarters during the Continental army's winter encampment at Valley Forge in 1777-1778.


In 1752 he established the iron plantation of Pottsgrove, where he built a mansion house and refinery forge and laid out a village in a grid pattern. He made Pottsgrove his family seat and the residential and commercial center for the forge. Warwick Furnace produced pig iron that supplied all these and other refinery forges in southeastern Pennsylvania.  The village of Pottsgrove was later renamed Pottstown.  However John’s manor house, still standing and open to the public, keeps the name Pottsgrove.

Posted by Paul Liepe at 7:03 AM No comments: