Millford, near Pinewood, South Carolina, is the second home that we have visited acquired and restored by Richard Jenrette and donated to the Classical American Homes Preservation Trust.  The first, in the spring of 2014, was Ayr Mount in Hillsborough, North Carolina.

Built around 1840, this Greek Revival mansion was built by the son of a South Carolina governor who later became governor himself.  While the exterior of the house is stunning, it is perhaps most famous for containing most of its original furnishings by Duncan Phyfe & Son. 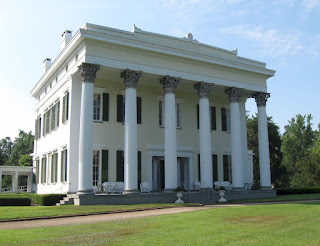 In addition to its furnishings, the double parlor was particularly interesting because it could be divided by closing a large set of mirrored folding doors.  In fact, there are many outstanding mirrors throughout the house.

At first, it struck me as odd that Millford had no connection to the nearby Santee River other than as a means to receive its furnishings from New York.   However, while labeled a plantation, Millford was actually a large country home rather than a working farm.  Water transportation was not needed to ship the produce from its fields.

This lack of water combined, my lack of interest in Phyfe, and its complete isolation left me thinking that I would not want to live at Millford – then or now.  Choosing between Mr. Jenrette’s properties we have visited, I much prefer Ayr Mount for its location and its more practical layout.

Posted by Paul Liepe at 6:10 AM No comments: