Temperance and Prohibition in Danville Virginia

It’s not a simple story.  Danville has gone from “wet” to “dry” and back many times.  Those who favored a dry town were often personally wet.  And at least one citizen died for the cause of Prohibition.

The battle over a wet or dry Danville began in earnest in 1886 when Virginia adopted legislation that made liquor sales a “local option.”  From that time, the citizens of counties, independent cities, and towns could vote to ban liquor sales within their borders.

One of the most outspoken proponents of a dry Danville and a dry Commonwealth was the Rev. John R. Moffett.  In addition to his duties as a pastor of a North Danville Baptist church, Moffett was editor and publisher of a weekly Prohibition newspaper called Anti-Liquor. 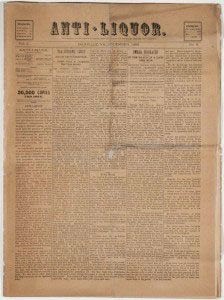 Despite the best efforts of Rev. Moffett and the Danville chapter of the Woman’s Christian Temperance Union, a July 1891 local option vote was 291-273 in favor of keeping Danville wet.

In 1892, Moffett went so far as to challenge the polling practices in Danville, resulting in a battle of words with one J. T. Clarke, a member of the predominant Democratic party and ex-bartender.  The battle escalated when Moffett lost his self-control, struck Clarke, and informed him that he “only conversed with gentlemen.”  Later in the week, on a Friday evening on Main Street, Clarke shot Moffett four times.  Moffett expired early on Sunday, November 14, 1892.  The North Danville Baptist Church, then under construction, was renamed Moffett Memorial (shown below) soon thereafter.  Clarke was convicted only of manslaughter, and received the light sentence of just five years from a jury of whiskey sympathizers.


It is difficult to track exactly when Danville went dry, but it is clear this was so by 1905 when the local option would again come to a vote.  The wets won this election, and by 1906, seventeen saloon licenses had been issued.  Later that year, a new city ordinance forbade screens or obstructions that would block the view of passersby into the saloons as well as amusements such as billiards.

During this time, Chief of Police R. E. Morris vigorously enforced the liquor laws, perhaps too much so, causing rebukes from Mayor Harry Wooding and Corporation Court Judge Archibald Aiken.  Later, in 1911, to Danville’s great embarrassment, Morris was identified as Thomas Edgar Stripling, wanted for murder in Georgia.

Perhaps to the relief of local officials, the entire Commonwealth went dry on November 1, 1916 – three years before national prohibition began.  In 1918, Virginia was the second state to ratify the 18th Amendment.  The entire country went dry on January 17, 1920.

As in many other locations, Danville found enforcement of Prohibition difficult.  Mayor Wooding was accused by the Woman’s Christian Temperance Union of being too lenient as judge of the Police Court while wets thought Judge Aiken was thought too harsh in the Corporation Court.  The police were anxious to shut down the “blind tigers” on Craghead Street.  (A blind tiger was a place where liquor could be purchased without the buyer and the seller seeing one another, making one unable to testify against the other.)  At the same time, individuals such as Mike H. Hatcher of Grove Street were also prosecuted.  Hatcher was convicted of possession of at least a gallon of liquor no less than four times by 1927.

While Prohibition was modestly successful in reducing the amount of liquor consumed and initially reduced the crime rate, it ultimately created a new breed of criminals and failed to reduce crime overall.  Chicago’s Saint Valentine’s Day Massacre in 1929 was pivotal in changing public opinion on Prohibition.

On March 22, 1933, President Roosevelt signed a law legalizing beer and wine with low alcohol content – 3.2% by weight.  Virginia followed suit on August 17, legalizing 3.2% beer and making arrangements for a referendum on Prohibition.  On October 3, in a special election, Virginia voters agreed to end statewide Prohibition when and if the 21st Amendment repealing national Prohibition was ratified.  Virginia was the 32nd state to approve the amendment on October 25.  National Prohibition ended on December 5, 1933.

On March 7, 1934, the Virginia Department of Alcoholic Beverage Control (ABC) was established to control the sale of alcohol.  The ABC has an absolute monopoly on the sale of hard liquor by the bottle in Virginia.  There are about 350 ABC stores, now located mostly in strip malls.  With a high markup on wholesale prices, these stores generated $140 million in profit for the state during 2014 in addition to the 20% excise tax and 5% sales tax. 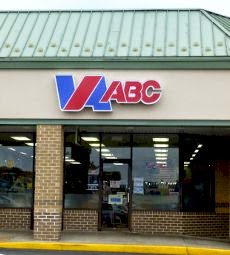 Liquor “by the drink” sales were not allowed by state law until 1968.  Before that time, private “brown bag” clubs were the only legal way to enjoy a drink with dinner out.  It remains unlawful to transport more than a gallon of liquor into Virginia from neighboring states.

For those who are so inclined, it’s interesting to compare the history of liquor sales and Prohibition with today’s efforts to legalize marijuana.  During national Prohibition, doctors could prescribe medicinal alcohol much as we now have medicinal cannabis.  I think Rev. Moffett would be opposed.

Posted by Paul Liepe at 2:51 PM No comments: