While in Savannah, Sarah (my heritage travel partner) and I took the opportunity to visit Washington, Georgia.  The most direct driving route would take a little over three hours.  Instead, we traveled west to Dublin, Georgia, and then north through Sandersville to retrace the path (in reverse) of Jefferson Davis as he fled from Union forces at the close of the Civil War. This route took about four hours.

Washington, population just over 4,000, is the county seat of Wilkes County, Georgia. This small city is often called Washington-Wilkes to differentiate it from other places with the same name.  It is located equidistantly from Augusta and Athens, Georgia – less than an hour from each. 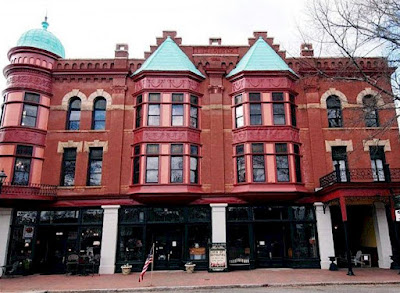 One part of our attraction to Washington was its historic hotel – The Fitzpatrick.  First completed in 1898, the hotel stood empty from 1951 until 2004 when it reopened after a complete renovation.  The Fitzpatrick today reflects its Victorian origins with period furnishings and a color pallet of reds, golds, and greens.  Our stay in a second-floor suite overlooking the town square gave us all the modern conveniences including a newly installed elevator.

The Fitzpatrick is also home to Maddy’s Public House, open Thursday through Sunday.  Opened in 2019, Maddy’s has live music on Thursday and Saturday nights.  We found Maddy’s to be the best in town with selections ranging from sandwiches to Fish and Chips and Prime Rib. 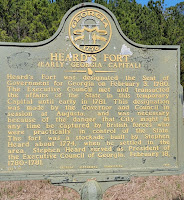 In Washington, history runs deep.  The revolutionary Battle of Kettle Creek took place about eight miles southwest of present-day Washington in 1779.  It was an important victory for the patriots who scattered a loyalist force and killed about 70 while losing only 32 of their own.  In 1880 and 1881, Heard’s Fort, a now desolate location about seven miles northeast of Washington, was the temporary capital of Georgia.

But Washington is better known for its role at the beginning and the end of the Confederacy. Some would even say that one Washingtonian was indirectly responsible for Jefferson Davis being elected to the Confederate Presidency. 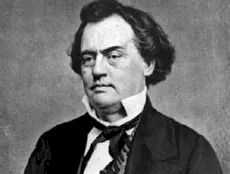 Robert Augustus Toombs, a wealthy planter and slaveholder, served in the United States Senate from 1853 to 1861.  On secession, he traveled to Montgomery, Alabama, to help craft the new nation. He was considered a likely candidate for President of the Confederacy.  Unfortunately, the night before the election, Toombs partied with the South Carolina delegation and became a little too "tight."  This reduced his stature with the delegates, resulting in Davis being elected as the provisional president.  The people of the Confederacy later elected Davis again.

Despite Toombs' failings and lack of diplomatic skills, Davis selected him to be the Confederacy’s first Secretary of State.  However, in frustration with President Davis, Toombs quickly resigned his cabinet position.  In July 1861 he was commissioned as a brigadier general.  After being wounded at Antietam, he resigned that commission in March 1863.  He later fled to Paris to avoid union arrest, returning to Georgia in 1866. 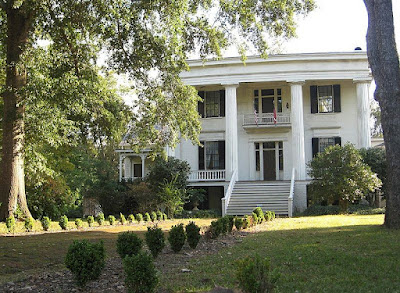 The Toombs House, built in 1797 by Dr. Joel Abbott, is preserved as an historic site and is open for visitors.  Guided tours were not available at the time of our visit, but an excellent visitors' book led us through the house.  The are many displays on the basement level detailing the life and career of Robert Toombs and also the enslaved people who worked at the home.

Because the family occupied the home until the 1970s, the main and second floors contain many items that belonged to Toombs himself.  Interestingly, the main floor includes a room reserved for Alexander Stephens – Toombs’ best friend, vice president of the Confederacy, and later Georgia governor.  Though slight (less than 100 pounds) and frail (often using a wheelchair), Stephens was a political powerhouse. 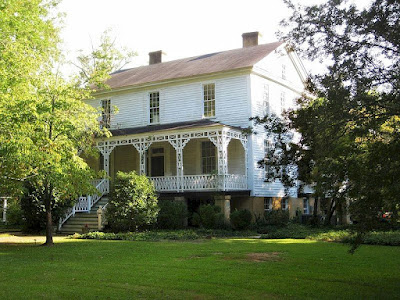 Just to the east on Robert Toombs Avenue is Washington-Wilkes Historical Museum. The home was built ca. 1835 by Albert Gallatin Semmes. As a museum, it has an interesting collection of artifacts including Jefferson Davis' camp chest – left behind in Washington as he traveled further south to avoid capture.
Wilkes County was fortunate not to be included in the battle plans of either the North or the South during the Civil War.  After General Sherman cut the South Carolina Railroad, Washington became a thoroughfare between the capital in Richmond and much of the South.  Avoiding larger cities and Union forces, it was also on the route used by Jefferson Davis and, proceeding ahead of him, his wife and family during their flight. 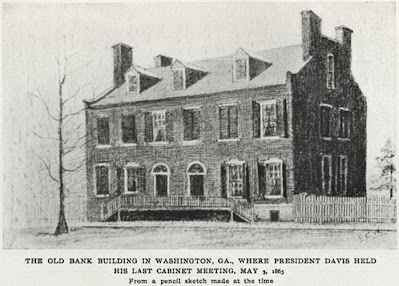 Davis arrived on May 3, 1865.  While important guests typically stayed with General Toombs, he was out of town.  Thus, Davis stayed above the Bank of Georgia with bank cashier Dr. J. J. Robertson.  The bank was located at the north end of the square. 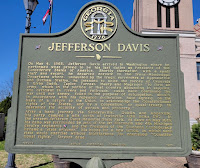 The next morning, before his departure, Davis called the last cabinet meeting of the Confederacy at the bank.  It was where Davis made his last official act as president, effectively dissolving the Confederacy.
While some locals tried to preserve the bank building, it was replaced by the present Wilkes County Courthouse in 1914.  In front of the courthouse is a marker commemorating Davis's time in Washington. 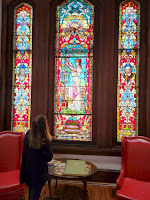 Among our last visits in Washington was the Mary Willis Library.  When it opened in 1889, it was the first free public library in the State of Georgia.  While built as a library, it more resembles a church with ornate Tiffany stained-glass windows. Included in its collection is a trunk left behind in Washington that once contained a part of the Confederate treasure. 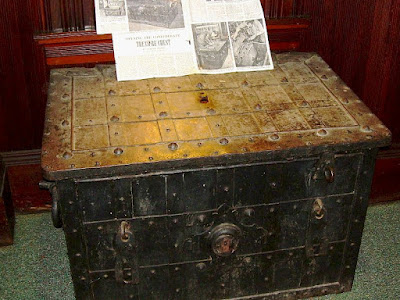 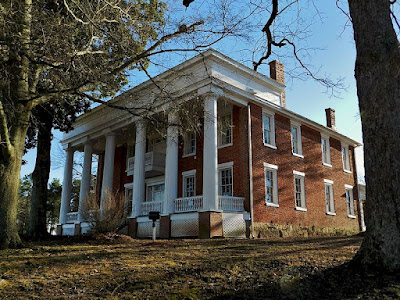 We ran out of time and energy to do more than drive by the historic Callaway Plantation, again on the National Register.  In addition to the 1869 Greek Revival plantation house, other buildings have been moved to the site to create an open-air museum.  We plan to visit Callaway at some time in the future.
Sources:
Numerous web sources including Wikipedia and the City of Washington
The Long Surrender by Burke Davis (1985)
Flight Into Oblivion by A. J. Hanna (1938)
The History of Wilkes County, Georgia by Robert M. Willingham, Jr. (2002)
Posted by Paul Liepe at 2:29 PM