On alighting in Greensboro on Tuesday, April 11, 1865, President Jefferson Davis and his Cabinet found a much different welcome than they experienced in Danville. Greensborians knew of the raids being conducted nearby by General George Stoneman and feared that assistance to the Confederate government would worsen their plight. The doors of their homes were closed.  But during their stay, the men of the own assured an ample supply of liquor for the Cabinet and the ladies provided pies and other delicacies.

Only one Cabinet member was taken in by a local resident – the ailing Treasury Secretary Trenholm by former North Carolina governor John Motely Morehead at his Blandwood Mansion (above). Some historians say this was less an act of kindness than an effort to have the Secretary exchange Morehead’s Confederate securities for gold or silver.

While President Davis may have been offered other lodging, he stayed with his first wife’s nephew, John Taylor Wood.  Wood, the grandson of President Zachary Taylor, a Confederate naval hero, and an aide to the President, had moved his family from Richmond to Greensboro several weeks earlier. Much of what we know about Jefferson Davis’s flight comes from Wood’s diary.  In his family’s modest apartment, he furnished President Davis with a small second-story room. In Flight Into Oblivion, A. J. Hanna reports the house was located on the site that later became the National Theater – about a block from the depot.

The National Theater in its heyday (above) and the site today (below). The site of John Taylor Wood's apartment will soon be lofts. 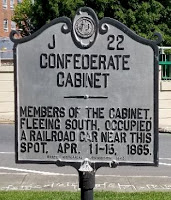 Meanwhile, the rest of the Confederate Cabinet occupied a dilapidated leaky passenger car and a boxcar on a siding nearby.  The cars served as both their quarters and their offices.  The railyard today is shown below.

Shortly after the arrival of Davis and most of his Cabinet, General P. G. T. Beauregard also arrived in Greensboro by train from Raleigh and set up his headquarters in boxcars near the Cabinet car.

The next day, April 12, General Joseph E. Johnston also steamed into town and set up offices in one of Beauregard’s boxcars. The two generals conferred that morning before being summoned by President Davis to his own boxcar offices. 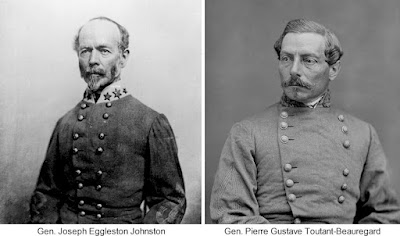 Johnston and Beauregard expected to brief the President on military conditions. Instead, the President spoke of gathering conscripts and deserters to quickly field an army large enough to continue the war.  On hearing the generals’ opinions that this would be impossible, Davis dismissed the meeting until the following day. 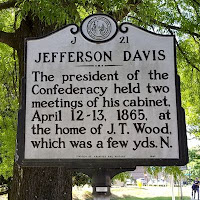 On the morning of Thursday, the 13th, President Davis called a cabinet meeting in the small apartment of John Taylor Wood. The generals later joined this meeting. Neither Johnston nor Beauregard offered any hope of carrying on the war.  They estimated Confederate strength at 25,000 men while Union forces totaled 300,000.  Johnston suggested it would be a crime to continue the effort and urged the president to negotiate for peace.  Polling his cabinet, Davis found all but one in agreement.  Reluctantly, Davis dictated a letter to be transmitted to Union General Sherman.

Late on the 13th or early on the 14th, the President received official word from General Robert E. Lee about his surrender at Appomattox.  This telegram convinced the President that the government must move further south for its safety.

Packing began on Friday the 14th.  Because Union General Stoneman had cut the railroad lines, travel would have to be by the unpaved roads and trails of the time.

Meanwhile, in Washington, D.C., Union President Lincoln was preparing for the ill-fated evening at Ford's Theater.

On Saturday, April 15, at about the time of Lincoln's demise, the Confederate government left Greensboro in wagons, ambulances, and on horseback.  As in Danville, the government’s departure resulted in rowdy troops and Greensborians raiding the Confederate warehouses for food and supplies.

It should have been during the Confederate government’s five days in Greensboro that President Davis realized the futility of additional combat.  It seems, however, that he vacillated between the desire to remain true to Confederate cause and to return to his beloved family that he believed to be in Charlotte.

Overall, the Confederate government was not treated to the fine southern hospitality for which Greensboro is still so well known. This was a harbinger of things to come.

Posted by Paul Liepe at 3:35 PM No comments:

On April 8, 1865, Lieutenant John S. Wise arrived in Danville after a hard ride from General Lee’s headquarters at Appomattox. He appeared just as President Jefferson Davis and others were dining at the Sutherlin mansion. Lee had authorized Wise to make an oral report for fear that a written document might be intercepted. Though Wise, Lee reported that his army was now too far west to turn south to Danville and that his only hope was to break through Union lines. Wise also offered the opinion that Lee would be forced to surrender in just a matter of days.  As we now know, surrender occurred at Appomattox the next day.  The first word of that surrender was received in Danville on Monday, April 10.

By that time, preparations were being made to move the President and the Confederate government further south. It was feared that Danville would soon fall into enemy hands.

(As it turned out, the absence of President Davis and his Cabinet meant Danville was no longer a primary target.  The mayor surrendered the town to Union forces on the morning of April 27, more than two weeks after Davis’s departure. Civilian control was returned in May just a few weeks later.) 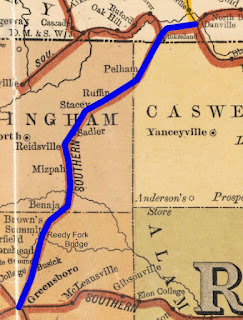 Travel to the south for the President and many others would be by the Piedmont Railroad. This road, constructed between 1862 and 1864, was not in the best of condition. Due to shortages when it was built, the ties were spaced too far apart. Fully open for only a year, it had seen heavy use transporting supplies from further south to Danville and on to Richmond in support of Lee’s army. It was only a hope that that the Piedmont Railroad had not been cut by the forces of Union General George Stoneman.

An overloaded train with the President and his Cabinet left the Danville depot near eleven o’clock that night. The train proceeded at a walking pace during the night so the engineer could verify there were tracks ahead.  Whether there were any depots along the line is unknown, but there were stations at Pelham, Ruffin, and Reidsville (the only real town along the line).  While stops were likely made for wood and water, the only known halt was to replace a failed engine five miles from Danville and still above the North Carolina border.

The tracks, now part of the Norfolk Southern, still follow their original route. While there is little evidence of the Piedmont Railroad per se, there is a Civil War Trails marker in Reidsville. It is across Market Street from the rails in front of the retirement home of antebellum North Carolina governor David Settle Reid. 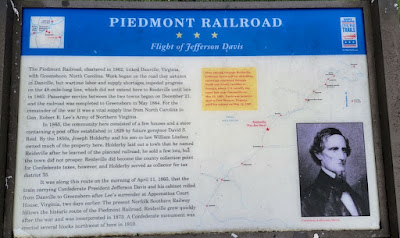 (Having first served in the U. S. House of Representatives from 1843 to 1847, David Reid was elected the 32nd North Carolina governor seated in 1851.  In late 1854, a month before his term as governor expired, he was named to fill a vacant seat in the U. S. Senate until 1858. Later, he was one of five North Carolina delegates to the February 1861 Washington Peace Conference just before President Lincoln was inaugurated. The unsuccessful Conference sought compromise between the states and to avoid additional secessions.)

Moments after Davis’s train crossed the Reedy Fork Bridge (see map above), about ten miles north of the Greensboro depot, the bridge was burned by Brigadier General Palmer’s brigade as a part of Stoneman’s Raid on North Carolina. The Confederate government had escaped destruction by minutes. 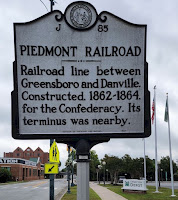 Early Greensboro maps show a wooden passenger depot near South Elm Street about two blocks west of the newer 1927 depot (above).  An historic marker for the Piedmont Railroad stands in front of the new depot.  The older depot (later part of the Richmond & Danville Railroad) was at the approximate location of today’s McGee Street at the railroad underpass (below). 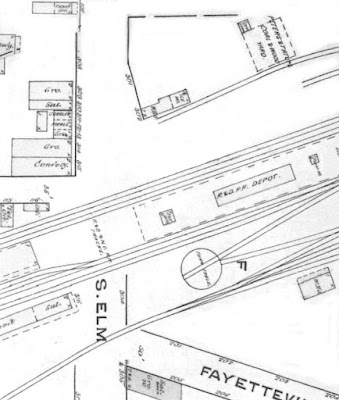 Posted by Paul Liepe at 2:28 PM No comments: